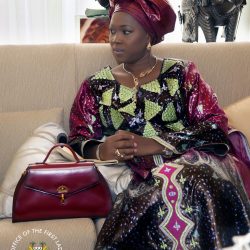 First Lady, Madam Fatima Maada Bio is motivated by pan- Africanist ideals. She is a strong believer in women empowerment as key to sustainable development. She pursued her passion for women empowerment as First Lady by staging a peaceful protest against gender based violence. It was a historic march as First Ladies from different African Countries came together in unity in a protest march on the streets of Freetown in December 2018. This was the beginning of her very powerful campaigned themed “Hands Off Our Girls”.

Born into the madingo tribal circle, she knew who her husband would be at age 10. She narrowly escaped Child marriage and started philanthropic work at a very tender age of 16.
She relocated to London where she pursued her passion for charity work. Her personal story is her main motivation and she has traveled the world providing support to vulnerable children, especially in Africa.

First Lady Fatima Bio has Bachelors of Art degree in Performing Art from the Roehampton Institute of London and in Journalism from the University of Arts, London College of Communication.
Worthy of note about Sierra Leone’s illustrious first lady is the niche she has garnered for herself through hard-work over the years in the entertainment industry as an actress, script Writer, executive producer and a multi award winning face of Nollywood industry. Among her barrage of prominent features in cinema is the ‘Mirror Boy’.

First Lady Maada Bio has received several awards including;
* Honoured with the Warrior Award at the International Women of Power Luncheon in California, U.S.A. for her bravery and outstanding contribution towards women and girls in Sierra Leone.
* Honoured as one of the most influential people of African descent under 40 in New York, United States.
*Miss Africa in 2000
* “Best Supporting Actress” for the movie Mirror Boy in 2011 “Best Actress Award” from the Black Ethnics, Fashion and Film
* In September 2013, Mrs Fatima Jabbe-Bio was voted the best female

The effective “Hands Off Our Girls” campaign ultimately led to the President, H. E. Rtd Brig. Julius Maada Bio’s declaration of a National Emergency on Rape and Sexual Violence in Sierra Leone on the 7th Feb 2019, and subsequent revision of the sexual offences act in September 2019.

Internationally, the First Lady has taken #HandsOffOurGirls to Canada; during the “Women Deliver Conference, The BBC London and The Commission on the Status of Women at the United Nations. Very recently, President Julius Maada Bio and First Lady Fatima Maada Bio of Sierra Leone, launched #HandsOffOurGirls campaign at a High Level meeting on the margin of the 74th United Nations General Assembly (UNGA), on the 25th of September 20019 at St. Regis New York.

In line with the UN sustainable development goals, the Hands off our Girls session in New York focused on “ Advancing campaign on the reduction of Early Marriage and Rape in Africa for the promotion of human capital development”. Statements were delivered by important global personalities such as Dr Tedros Adhanom Ghebreyesus, Director-General of the World Health Organisation; Dr Akinwunmi Adeshina, President of African Development Bank, Mr Dereje Wordofa – UNFPA Deputy Executive Director; Mr Ziad Dalloul, Founder of Africell; Her Excellency Mrs Clar M. Weah, First Lady of the Republic of Liberia and Her Excellency Mrs Emine Erdogan, First Lady of Turkey. The declaration by First Ladies in Africa supporting the campaign was read by H. E. Madam Jeannette Kagame, the First Lady of Rwanda. Other First Ladies in attendance were Mali, Burkina Faso, Zimbabwe, Niger, Chad, Angola and the Democratic Republic of Congo.

At the height of the COVID pandemic, First Lady launched the National food basket programme to supply free bags of rice, oil, salt and other food items to every district in the country.

The Free sanitary pads for school going girls initiative was launched December 2019 to support the Free Quality Education initiative of the Government. The sanitary pads programme saw a huge reduction in girls skipping school. Sensitisation campaign on menstrual sanitation was an integral part of the Free Sanitary Pad campaign. First Lady went further by providing solar powered boreholes to provide water all year round in hard to reach communities. Based on these and other practical deliverables, on Thursday 27 May 2021,The African Union formally recognised Her Excellency as champion for sanitation and hygiene. Presently the Government of Sierra Leone will be one of the few countries in the world to offer free sanitary pads to school girls.

Beside her battery of laurels, First Lady Fatima Bio won the Gathering of African Best (GAB) Awards for her exceptional contribution to promoting a positive image of Africans around the world.

Presently First Lady Bio is building a hospital, a Centre of Excellence and an administrative block at the 34 Military Hospital in Freetown. She is determined to make the Military Hospital established in 1934, one of the best in Africa in terms of delivery.

Her prowess and strategy was noticed by the nation during the 2018 elections in Sierra leone where she took a pro-active role. She was able to broker peace easily amongst warring parties. Her down-to-earth communication skills was not only due to her formal education, but also her affinity with the grassroots.

At the Commonwealth Heads of Government meeting in London in 2018 , the Queen of England was excited to meet with Africa’s newest first Lady. The Queen was impressed with her tenacity in helping to change the perception of the role of women in politics.

In line with her husband’s vision, First Lady Bio believes education is key. Her philanthropic character is inborn and she is a fantastic role model that leads by example. Her greatest strength is her ability to achieve any goal she sets. Some say it is divine, but people close to her say it is pure, undiluted hard work, while others insist it is a combination of both divine intervention and hard work.